This doesn’t have much relation with original story but can be used as reference about the countries in this world.
==
The shape of the Continent (It doesn’t have any specific name and is only called the ‘continent’) is roughly shaped like a ‘hippopotamus facing the left side’. The head part is the continent’s western region, the upper half of its body is the middle continent, and the lower half part is the continent’s eastern region.


The reason is the largest religion in the continent, ‘Eon’s Sacred Teaching’, has a doctrine of ‘Every race other than humans like demi-humans and beastmen are born bearing sins and are criminals, they’re existences inferior to humans’ as their basis, and with that they’re showing off the vast territory human countries occupy.


In actuality, every region has its own unique culture, so it can’t be said which one is better.


Moreover, in the continent there are more than 60 countries (There’re also other countries, archipelago nations, or even unconfirmed continents outside of the ‘continent’).


One of them, boasting the largest area is Cres Cent'luna Federation which occupies the lower half of the middle continent. However because they made cooperative policies towards the demi-humans and demi-human countries they received oppression from Eon’s Sacred Teaching and ended as up nothing more than a group gathering. Now since it’s hard for them to even cooperate, many of them have been absorbed into the several empires surrounding it.
The representative of the Federation is called the ‘president’. It’s not a hereditary position but is selected from each nation’s representative, and is a lifetime honorary position.


The second most powerful one is Graviol Empire which rules the continent’s eastern region up to the top edge of the middle continent’s vicinity (and it also has detached land which is part of western region).
As a country where the highest authority lies with the emperor, sometimes there are disputes with the surrounding countries.
However even though the former emperor had the authority which is close to a perfect monarchy, the current country is way too vast and there are some parts which the emperor’s control doesn’t reach. Seeing this gap, there are some actions which are unclear whether it’s the will of the emperor or not.
As they put effort into diplomacy and foreign trade, they create favourable connections toward other countries especially from the western region.


The third and the last powerful country is the Holy Kingdom of Eon.
Situated at middle of the continent and as its name indicates, it is the religious country of Eon’s Sacred Teachings. A religious country where every citizen is part of the religious organisation.
Their territory is not that vast, but as the largest religion they have extremely powerful influence in many countries. Furthermore, because of [[Crusade]], a magic that can be used by high level clergyman (though they call it ‘a miracle from God’) that allows them to manipulate all religious member into wicked soldiers, every country is on guard against them.
And because of their doctrine ‘the family of the sinner must also die to repay the sin’, in the past strife between them and demi-human countries or other countries which have relations to it, they are often accompanied with massive killings. That’s why their relationship with the Cres Cent'luna Federation is the worst.
Diplomatic relations since the beginning were nothing more than a distribution of goods.
Even though their representative is [[Great Pope]] who is chosen by the oracle, it’s nothing more than figurehead, while in reality the country’s management is handled by a judicial panel consisting of people with the court ranking of archbishop or higher.
It is an unsociable country, and almost never tries to interact with other countries actively.


Amitia is one of sixteen countries existing in western region, in terms of territory area it is number 7, in terms of agricultural exports it is number 1, and in terms of national power it placed around 5th or 6th.
Its capital is Caldia, but since it has bad access the population is only number 3rd. (The 1st is the trade port city, Kidou, the 2nd is in the central trading route city, Arra).
In term of culture it’s pretty high for this world’s standard, but in general the country is made up of peaceful idiots. After a few decades there has been no advancement in either cultural or magic inventions.
Their representative is a king, but the aristocrats from House of Nobles have enough influence to control the decisions, in short the king is nothing but decoration. (This is also true in various kingdoms in the continent)


The current king has 6 sons and 5 daughters, almost all—king included—have personalities that do neither harm nor good except the third prince Asil Cloud (and his little sister, Angelica Iris), who has real achievements, ability, outward appearance, superior personality, and has earned the enthusiastic support of the citizens and part of the military.
By the way, the reason Hiyuki chose this country is none other than because ‘it has a lot of greenery and seemed peaceful’.
------
TL: I know you're dissatisfied, but please make do with some Angelica~ *run* 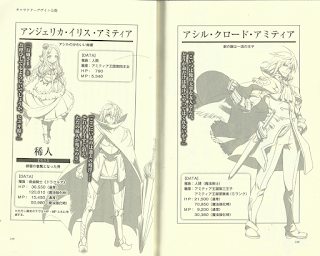 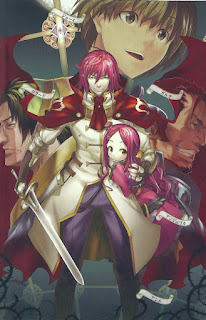 Popular posts from this blog

May 12, 2015
Let’s in crisis == Editor: Dre == I’m looking at the sky. A little girl is looking at the sky. Ah, what a beautiful blue sky. Admiration leaks from that girl’s mouth. A sudden expanded world. An opened grassland. Remains of a decaying ruin. A flowing brook. A far away mountain range. As if it was the Iota’s region in “Zexiahart Biography of Illusions”… she thought in a daze. “Eh?” That’s why that girl is confused. Raising her lying body, she looks at the soil in her hand. “Soil.” A natural confirmation. But it’s a truth that is not natural in any way. “Where is…this?” While pressing her head as her thoughts starts to be clear, she stands. Then she once again feels confused. Where is this? She has no recollection whatsoever about this place. No, wait. “I think…I know this place. That ruin…is Signa Ruin. That mountain peak…it’s Jiltia mountain range…and that river is connected with Rull river.” As it was smoothly said from that girl’s mouth, she convinced herself that this is not an
Read more 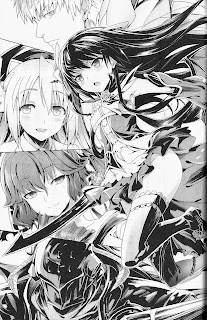 Editor: Crash  == With a Single Blow == “Sinner of Rose (Gilles de Rais)!” I summoned my beloved sword to my hand, a jet black sword with a transparent edge. It didn’t come from a special quest nor a boss drop but was created with the blacksmith skill--the strongest one with all ten successful reinforcements after more than thousand failed products. Even within the server, swords that can compete with it can be counted with the fingers on one of your hands. I grasped the sword, “Sinner of Rose (Gilles de Rais)” with one hand. By the way, there’s also an odd pervert in this world who successfully strengthened a rare sword from a level 120 boss that only drop once every 2000 times, eight times! (He is one of my guild member though. As you would expect everyone stopped him before he strengthened it a 9 th time). That’s why I can’t carelessly boast about my sword being the best. “Rose of War Fire (Anne of Geierstein)!” In an instant, the dress I wore disappeared, a
Read more

June 03, 2015
Risking Your Own Body for the Sake of Others == Editor : Crash == Second chapters start. That said, it’s still in Arra Town... lol == “…This has become something troubling.” The guild leader of Arra, Collard, who I just met a week ago was furrowing his brow and said that while heaving deep—very deep sighs. “Well, I feel you're always troubled every time we meet though?” Guild Leader Collard looked at me with a reproachful gaze as I unconsciously let my true thoughts leak out. “I think it’s because in 8 out of 10 cases, your majesty is the cause.” At some point he had changed the way he addressed me to ‘your majesty’. When I entered this room the first time and undid my disguise, he prostrated himself and started saying “For Your Majesty to grace this one with your presence is—“. I successfully stopped him with “It’s fine already, just talk normally!” but it seems he doesn’t have any intention to change the ‘Your Majesty’ part. Even so, 8
Read more